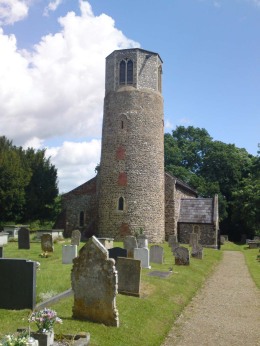 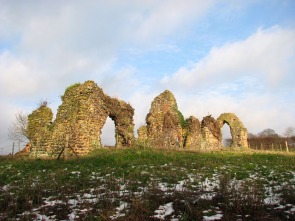 The Church of St Mary’s, Surlingham is one of 124 existing round-tower churches in Norfolk.  As well as being a place of worship it hosts a variety of community events, from ‘messy church’ to concerts.  The adjacent Church Marsh nature reserve  is overlooked by the ruins of St Saviour’s church.

St Mary’s bells have been in place since the 14th Century.  The bells were restored and augmented in 1999.  At present there are 6 bells with the following characteristics:

The ruins of St Saviour’s church, Surlingham form a prominent and evocative land-mark overlooking the marshes of the Yare Valley.  The church was an early Mormon (late 11th Century_ foundation and is notable for its large coursed flint-work and axial tower plan.  Originally there were two parishes in Surlingham, and St Saviour’s was linked to the nearby Surlingham manor.  By the 13th century it was under the control of the Abess of Carrow Abbey.  The population of the parish subsequently declined and eventually St Saviour’s was subsumed into the parish of St Mary’s in 1705.  It gradually decayed, a process accelerated by the robbing of the church for building materials.

For the last two centuries the site has provided a tranquil destination and a place of contemplation for generations of local people, walkers, naturalists and antiquarians.  It is also the final resting place of a number of local residents including ‘the people’s naturalist’, Ted Ellis (1909-1986) writer, curator and founder of Wheatfen nature reserve.

St Saviour’s was repaired and preserved in 2011.  Click here for an architectural history published by Norfolk County Council.